Nephron Pharmaceuticals Corporation has become a leading pharmaceutical manufacturer in South Carolina since it broke ground in Columbia in February 2012. At that time, initial plans called for 700 new hires and $310 million in capital investment over the next 5 to 10 years. Today, the state-of-the art facility includes over 800 employees, and the overall investment is nearly $350 million.

EDGE talks with Lou Kennedy, CEO of Nephron Pharmaceuticals, about the company’s evolution in South Carolina, and how readySC™ and Apprenticeship Carolina™ are helping to meet its workforce needs.

EDGE: How did Nephron Pharmaceuticals get its start in South Carolina?

Lou Kennedy: For 20 years, we have been in commercial production of respiratory solutions. Those are nebulizer solutions that are used for breathing. We moved into our new South Carolina facility in summer 2014 and received our first Food and Drug Administration approval in 2015. Since then, we have also obtained approval for a new generic drug. In 2017, we launched a brand-new division within the company which we have been pushing for the last 15 to 16 months.

EDGE: Would you tell us more about your new division?

LK: It is defined as a 503B outsourcing division. In 2013, Congress passed the Drug Quality and Security Act. It has two distinct parts, one of which includes outsourcing or sterile compounding. When that act passed, we knew we wanted to get into sterile compounding. We got the division off the ground in Summer 2016, then finally launched it, in earnest, in January 2017.

EDGE: How did the new division lead to your decision to begin an apprenticeship program?

We went on a major Facebook campaign for external candidates, and we also interviewed internal candidates. If someone was working in a department like quality, and we thought they would be a good fit as a sterile pharmacy technician, we offered them a spot in the program.

EDGE: Nephron also worked with readySC during your company’s startup. What are some of the benefits that Nephron has received from readySC’s training and recruitment services?

LK: I love the readySC program. Let’s start with the recruitment microsite they hosted to help us get candidates. They all go into what I call my “resume pot,” and we are always combing through it to find good folks.

We also appreciate readySC for the new-hire training they provided from the very beginning in conjunction with Midlands Technical College. We still use that to this day in our new-hire boot camp training, and are very pleased with it.

Recently, I was bragging on the program to a potential pharma company that is looking at this industrial park. The fact that readySC promotes a really healthy, vibrant technical college experience, and that it has been a part of that movement for over 50 years, is a benefit to all of us in manufacturing. That is especially true for those of us who are hiring large numbers of employees.

From a personal experience, I can tell you that recruiting in South Carolina has been so much easier for us than in Florida. We have such a big focus on manufacturing in this state, and I would say that students recognize that. I believe there are a lot more engineering candidates, chemists, microbiologists and all the positions that we hire. There is absolutely everything to love about South Carolina.

EDGE: What are some things that you think will help advance the pharmaceutical industry in SC?

LK: We are doing everything we can in economic development to bring in more life sciences, health care and pharma companies. I am working on that personally as the board chair for SCBIO, which is an offshoot of the Department of Commerce. I want to help them and others recruit more health care and life sciences to this state.

Because the more jobs that we have that are high-paying, the more we will attract and employ chemists, microbiologists and engineers right here at home. It is all part of the bigger picture, and that is a personal goal of mine.

I am also trying really hard to encourage my fellow business owners to get involved in schools as early as possible. I know the more I talk to our educators, the sooner they can identify students who might be on a career trajectory toward the jobs that we have here at Nephron. All of us need to adopt the attitude that we have to embed ourselves in the schools from elementary school up into the universities. If we do that, it will be easier for all of us to keep our talent here in South Carolina.

EDGE: Tell us about Nephron’s relationship with your local technical college. How is it helping to meet your company’s training needs?

LK: I feel like we work together really well. This is a manufacturing state, and I think that is because we have such a good technical college program. Anything that you are doing to advance skills, I am in support of it.

EDGE: If you had to choose a phrase that best describes South Carolina’s readySC and Apprenticeship Carolina programs, what would it be, and why?

LK: I would say both the readySC and Apprenticeship Carolina programs are business lifesavers and a community improvement benefit all in one. What I mean by that is, by helping us identify a way to get candidates to work and into an apprenticeship program improves our company. The bigger benefit is when we raise people’s abilities and their pay rates, we raise the standards of our own communities. And that is a legacy that all of us should leave.

readySC and Apprenticeship Carolina are getting South Carolinians jobs, and improving their abilities so that they get better jobs and make more money that stimulates our economy. That is what they are doing to be transformational to this state.

EDGE: What stage is your apprenticeship program in currently?

Brooks Burnside: We currently have one registered apprenticeship program, which is in its first round. We have eight students who are enrolled at Midlands Technical College (MTC) working toward their community pharmacy technician certificate. The end goal for these students is to become a certified pharmacy technician here at Nephron. The apprentices will complete their MTC education as they are being trained in our robust internal on-the-job training program. They will be filling our sterile syringes for those extremely important medications that we are making in our 503B outsourcing facility.

EDGE: How helpful was the assistance that Apprenticeship Carolina and Midlands Technical College provided to your program’s development?

BB: We have a fantastic relationship with Apprenticeship Carolina and MTC. They were extremely supportive in getting our program started, which was a whirlwind effort. They helped us put together our apprenticeship program in a matter of weeks.

EDGE: What has been the response to the program in your facility?

BB: It has been such a huge hit. All of our current students have talked so highly about the program that we have had over 25 current employees interested in enrolling for the next session, which will kick off this fall. We are very excited that our employees want to grow within the company, and that the apprenticeship has been such a success thus far.

EDGE: What kind of future do you see for apprenticeships at Nephron?

An apprenticeship is great for individuals who may not have a background in pharmacy, or the subject matter at hand, but they have proven themselves as employees here in other areas such as work ethic, documentation, and attention to detail. We are able to give them the chance to grow in the company, and grow for themselves. I know everyone here is grateful for the opportunity. It is not every day that you have the chance to get an education that is completely paid for, while simultaneously growing within a successful company.

When Nephron Pharmaceuticals decided to develop a sterile pharmacy technician apprenticeship, no one suspected that their first apprentice was already waiting just outside their door. According to Lou Kennedy, CEO of Nephron, “Unbeknownst to us, we had a security guard who was interested in pharmacy. And, as it turns out, he has a four-year degree in chemistry from Allen University.”

Travis Childs described his journey from chemistry to security and finally to pharmacy. “I came to Columbia in 2002 to attend Allen University and play football. I pursued a degree in chemistry because I wanted to be different from my teammates and challenge my mind. But after graduating in 2008, I was not able to find a job in my field, so I moved into the security field.”

“I worked security in the hospital system until one day a pharmacist heard me say I have a degree in chemistry. The young lady told me about Nephron, and I became a security guard here in 2014. Then when the email for the pharmacy tech program became available, I quickly signed up.”

Brooks Burnside, head of Nephron’s training department, explained, “As soon as Travis found out about the apprenticeship, he applied and was accepted before we even had other folks in the program. He was the first one to have that initiative to jump in and really take advantage of it.”

Lou Kennedy mused, “Here was this gem sitting in our security guard shack, and we had no idea. I asked Travis why he hadn’t applied to our chemistry lab instead of security, and he said that he did not practice chemistry right out of college, so he felt he would be rusty. I asked him to go through the apprenticeship program, and if he liked it, to stick with it.”

“I am overjoyed to be a part of this apprenticeship,” Childs responded. “This is a really positive opportunity, and I think it’s great to give people a push to continue their education. I knew the program would be a challenge, but I knew I could do it with so much support and encouragement from Mrs. Kennedy, the Nephron staff and my family.”

“He has been a huge success story for us,” added Kennedy. 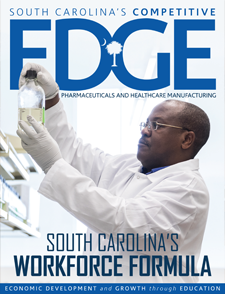